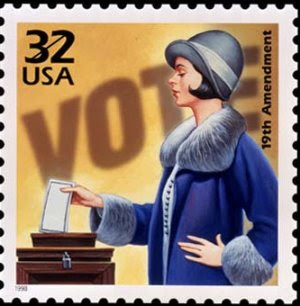 Today marks 90 years of voting rights for American women.  This is from Jennifer O'Malley Dillon, executive director of the Democratic Party, asking me to commit to voting in the upcoming election:

For the first 144 years of this country's existence, women were not guaranteed the right to vote — and winning that right did not come easily.

Women's suffrage took a movement. It took organizers who worked tirelessly and allies who fought for the cause in the halls of power. On August 18th, 1920, when the legislature of the state of Tennessee voted to ratify the 19th Amendment and affirm its place in the Constitution, it passed by a single vote.

Because of the work of those who came before me, my right to cast a ballot was never in question. From the first time that I stepped into a voting booth to the day when I became the executive director of the Democratic Party, I've been deeply mindful of that fact.

Yes, I plan to vote in November.  I love to vote, wish I had the chance to do it more often and above all, I wish more people took advantage of the opportunity.  But I'm not going to let the Alabama Democratic Party's recent action pass without comment.

A couple of years ago on Women's Equality Day, Grace reminded us that suffrage was not handed to women on a silver platter.

Long before we saw the tragedy of Kent State, before we became aware of what “enhanced interrogation” actually entailed or saw the photos from Abu Ghraib, there was a place in Virginia called “The Occoquan Workhouse” where 100 American women were incarcerated, humiliated and tortured for “obstructing traffic” as they stood as “Silent Sentinels” on the sidewalk outside of the White House holding banners demanding the right for women to be able to vote.

Women suffered and bled to win the right to vote and I try never to forget that on election day.  I hope the Party of the People doesn't forget it either.

What happened in Alabama?

Tennessee was the 36th state to ratify the 19th Amendment and their Legislature did it by a margin of only one vote 90 years ago today.  What about Alabama?  Well, the Alabama Legislature finally got around to ratifying women's right to vote on September 9, 1953 — almost 33 years after women's suffrage became the law of the land.

Alabama still lags behind in rights for women, even in the Democratic Party.  Just four days ago the Alabama State Democratic Executive Committee failed to pass a Bylaw amendment that would have made the President of the Alabama Federation of Democratic Women an ex officio member of the SDEC Board.  It's worth noting that such an arrangement already exists in Tennessee, and even in Mississippi there is a standing committee for their Federation of Democratic Women on the SDEC.  Alabama is lagging behind our neighbors, and badly.

What makes this situation even worse is that in Alabama in 2008, 74.3% of eligible women registered to vote (Source: Table 4) compared to only 68.5% of men.  Women outnumbered men by about 270,000 at the Alabama polls in November 2008 and voted for Democrats significantly more often than male voters.  The state Democratic Party leadership ought to reflect the importance of that female influence it enjoys at the ballot box.  Unfortunately, the Alabama Democratic Party, like most of state government, is male dominated.

There are currently eight officers of the Alabama Democratic Party.  Only one, Vice Chair Nancy Worley, is female.  And she both made the motion to adopt the Bylaw change and moved to table her own motion — isn't that a trip?

To continue with the numbers game, of the 34 positions on the Executive Board, which includes the officers, only 14 are held by women.  That's a measly 41%, a number which should be unacceptable to Democratic women Democrats all across this state.  And the entire SDEC itself currently has 278 positions, 133 of which are held by women.  That is slightly less than 48%, still unacceptable in a state where women make up over 55% of registered voters.

Why is it that women are so underrepresented on the Alabama State Democratic Executive Committee?  And what is the Alabama Democratic Party going to do about it?  They failed to put even one more woman on the Board last weekend … Nancy Worley told me she moved to table her motion because, “It became apparent that there was a significant amount of opposition to this Bylaw change if other groups were not given consideration,” and she thought it was doomed to fail if it came to a vote.  Others have told me they felt sure it would have passed, and in fact questioned the outcome of the voice vote that table it, but either way, it's crystal clear the SDEC failed to take even a tiny step to correct the male dominance of the party leadership.

As we approach this very important election on November 2nd, I can't imagine a more boneheaded move by the committee than to publicly diss 55% of the electorate.  And of course, Alabama Republicans have noted this action.  This is from their press release on Monday:

They will undoubtedly make even more political hay of this move unless and until the SDEC takes corrective action.  There is another meeting of the SDEC on August 26th — which is coincidentally Women's Equality Day.  I suggest that would be a very opportune time to start moving (at least a little) to give women proportional representation in the Alabama Democratic Party by passing the AFDW Bylaw amendment.

The AFDW Facebook page says, “They won't let us sit on the SDEC Board, but we will continue to work to get our candidates elected.”  I might add, “… but with somewhat less enthusiasm.”